While glow the heavens with the last steps of day,

Far, through their rosy depths, dost thou pursue

Might Mark thy distant flight to do thee wrong,

As, darkly seen against the crimson sky,

Thy figure floats along.

Of weedy lake, or marge of river wide,

Or where the rocking billows rise and sink

There is a Power whose care

Teaches thy way along that pathless coast—

The desert and illimitable air—

All day thy wings have fanned

At that far height, the cold, thin atmosphere,

Yet stop not weary to the welcome land,

Though the dark night is near.

And soon that toil shall end,

Soon shalt thou find a summer home, and rest,

And scream among thy fellows; reeds shall bend

Thou’rt gone, the abyss of heaven

Hath swallowed up thy form; yet, on my heart

Deeply hath sunk the lesson thou hast given,

And shall not soon depart.

He who, from zone to zone,

Guides through the boundless sky thy certain flight,

In the long way that I mmust tread alone,

Will lead my steps aright.

Today is the birthday of American poet William Cullen Bryant, who was born November 3, 1794.

Season of mists and mellow fruitfulness,

Close bosom-friend of the maturing sun;

Conspiring with him how to load and bless

With fruit the vines that round the thatch-eves run;

To bend with apples the moss’d cottage-trees,

And fill all fruit with ripeness to the core;

To swell the gourd, and plump the hazel shells

With a sweet kernel; to set the budding more,

And still more, later flowers for the bees,

Until they think warm days will never cease,

For summer has o’er-brimm’d their clammy cells.

Who hath not seen thee oft amid thy store?

Sometimes whoever seeks abroad may find

Thy hair soft-lifted by the winnowing wind;

Or on a half-reap’d furrow cound asleep,

Drows’d with the fume of poppies, while thy hook

Spares the next swath and all it twined flowers:

Steady thy laden head across a brook;

Or by a cyder-press, with patient look,

Thou watchest the last oozing hours by hours.

Think not of them, thou hast thy music too,—

And touch the stubble-plains with rosy hue;

Then in a wailful choir the small gnats mourn

Among the river sallows, borne aloft

Or sinking as the light wind lives or dies;

The red-breast whistles from a garden-croft;

Today is the birthday of English Romantic poet John Keats, who was born October 31, 1795.

The wind was a torrent of darkness among the gusty trees.

The moon was a ghostly galleon tossed upon cloudy seas.

The road was a ribbon of moonlight over the purple moor,

And the highwayman came riding—

The highwayman came riding, up to the old inn-door.

He’d a French cocked-hat on his forehead, a bunch or lace at his chin,

A coat of the claret velvet, and breeches of brown doe-skin.

They fitted with never a wrinkle. His boots were up to the thigh.

And he rode with a jewelled twinkle,

His rapier hilt a-twinkle, under the jewelled sky.

Over the cobbles he clattered and clashed in the dark inn-yard.

He tapped with his whip on the shutters, but all was locked and barred.

He whistled a tune to the window, and who should be waiting there

Plaiting a dark red lock-knot into her long black hair.

Where Tim the ostler listened. His face was white and peaked.

His eyes were hollows of madness, his hair like mouldy hay,

But he loved the landlord’s daughter,

Dumb as a dog he listened, and he heard the robber say—

“One kiss, my bonny sweetheart, I’m after a prize to-night,

But I shall be back with the yellow gold before the morning light;

Yet, if they press me sharply, and harry me through the day,

Then look for me by moonlight,

Watch for me by moonlight,

I’ll come to thee by moonlight, though hell should bar the way.”

He rose upright in the stirrups. He scarce could reach her hand,

But she loosened her hair in the casement. His face burned like a brand

As the black cascade of perfume came tumbling over his breast;

And he kissed its waves in the moonlight,

Then he tugged at his rein in the moonlight, and galloped away to the west.

And out of the tawny sunset, before the rise of the moon,

When the road was a gypsy’s ribbon, looping the purple moor,

King George’s men came marching, up to the old inn-door.

They said no word to the landlord. They drank his ale instead.

But they gagged his daughter, and bound her, to the foot of her narrow bed.

Two of them knelt at her casement, with muskets at their side!

There was death at every window;

And hell at one dark window;

For Bess could see through the casement, the road that he would ride.

They had tied her up to attention, with many a sniggering jest.

They had bound a musket beside her, with the muzzle beneath her breast!

“Now, keep good watch!” and they kissed her. She heard the doomed many say—

Look for me by the moonlight;

Watch for me by moonlight;

I’ll come to thee by moonlight, though hell should bar the way!

She twisted her hand behind her; but all the knots held good!

She writhed her hands till her fingers were wet with sweat or blood!

They stretched and strained in the darkness, and the hours crawled by like years

Till, now, on the stroke of midnight,

Cold, on the stroke of midnight,

The tip of one finger touched it! The trigger at least was hers!

The tip of one finger touched it. She strove no more for the rest.

Up, she stood to attention, with the muzzle beneath her breast.

For the road lay bare in the moonlight;

Blank and bare in the moonlight;

And the blood of her veins, in the moonlight, throbbed to her love’s refrain.

Tlot-tlot; tlot-tlot, in the distance? Were they deaf that they did not hear?

Down the ribbon of moonlight, over the brow of the hill,

The red coats looked to their priming! She stood up, straight and still.

Nearer he came and nearer. Her face was like a light.

Here eyes grew wide for a moment; she drew one last deep breath,

Then her finger moved in the moonlight,

Her musket shattered in the moonlight,

Shattered her breast in the moonlight and warned him—with her death.

He turned. He spurred to the west; he did not know who stood

Bowed, with her head o’er the musket, drenched with her own blood!

Not till the dawn he heard it, and his face grew grey to hear

How Bess, the landlord’s daughter,

Had watched for her love in the moonlight, and died in the darkness there.

Back, he spurred like a madman, shouting a curse to the sky,

With the white road smoking behind him and his rapier brandished high.

Blood red were his spurs in the golden noon; wine-red was his velvet coat;

When they shot him down on the highway,

And he lay in his blood on the highway, with a bunch of lace at his throat.

And still of a winter’s night, they say, when the wind is in the trees,

When the moon is a ghostly galleon tossed upon the cloudy seas,

When the road is a ribbon of moonlight over the pruple moor,

A highwayman comes riding, up to the old inn-door.

Over the cobbles he clatters and clangs in the dark inn-yard.

He taps with his whip on the shutters, but all is locked and barred.

He whistles a tune to the window, and who should be waiting there

Plaiting a dark red love-knot into her long black hair.

A Little Poetry—Today is the birthday of Alfred Noyes, who was born September 16, 1880. The poem “The Highwayman” is his most enduringly popular writing; It might be my favorite ballad! Especially effective is Noyes’ use of repetition to further the suspense and action of this tragic romance.

A Little Music—This poem has inspired several musical versions, but my favorite is that sung by Celtic singer Loreena McKennitt. You can listen to her sing a slightly revised version of “The Highwayman” at YouTube. <http://www.youtube.com/watch?v=teq2m0BN-Wo> 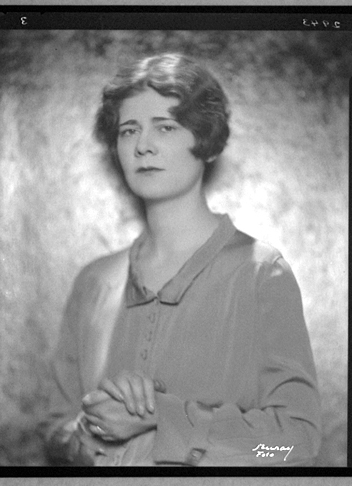 Which circle slowly with a silken swish,

Come to my hand, and playful if I wish,

Or purring softly at a silver dish,

I love bright words, words up and singing early;

Words that are luminous in the dark, and sing;

Gilded and sticky with a little sting.

Today is the birthday of Elinor Wylie, who was born on September 7, 1885. This poem by her has always been one of my favorites. The alliteration here is mesmerizing.