Frisky as a lambkin,

Busy as a bee—

Modest as a violet,

As a rosebud sweet—

Bright as a diamond,

Pure as any pearl—

Such a little girl.

Happy as a robin,

Gentle as a dove—

Fly away and seek her,

Little song of mine,

For I choose that very girl

A Song of Greatness

When I hear the old men

When I hear them telling,

Then I think within me

I too am one of these.

When I hear the people

Praising the great ones,

Then I know that I too

I too when my time comes 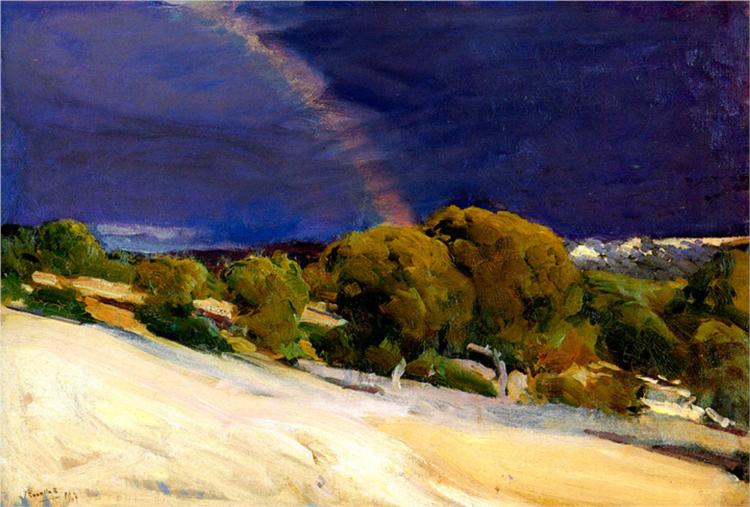 This Spanish folk song, and the painting by Spanish impressionist Joaquín Sorolla, are featured on Wrestle with the Angel in honor of Hispanic Heritage Month, September 15-October 15.

“De colores” (“Of Colors”) is a Spanish folk song celebrating the beauty of creation and its many bright colors. The chorus may be translated as “The great love of many colors is mine.” The melody has been popular in the Americas at least since the sixteenth century, having been brought to the Western hemisphere with Spanish colonization. There are many verses and variations now sung around the world, but these are the two verses I know best. You can listen to this folk song on YouTube. <http://www.youtube.com/watch?v=rJmwUYoJtVY>

My Orchard in Linden Lea

By the oak tree’s mossy root,

Now do quiver under foot.

And birds do whistle overhead,

And water’s bubbling in its bed,

And there for me the apple tree

When leaves that lately were a-springing

Now do fade within the copse,

And painted birds do hush their singing

Up upon the timber tops,

With fruit for me the apple tree

In the air of dark-roomed towns—

I don’t dread a peevish master,

Though no man do heed my frowns.

I be free to go abroad

Or take again my homeward road

To where for me the apple tree

A Little Poetry—The original poem, “My Orcha’d in Linden Lea,” by William Barnes was written in the Dorset dialect. It begins “‘Ithin the woodlands, flow’ry gleaded;/ By the woak tree’s mossy moot,/ The sheenan grass bleads, timber sheaded,/ Now do quiver under voot.”

A Little Music—The composer Ralph Vaughan Williams set to music this poem in common English and another by Barnes—”In the Spring.” You can listen to a beautiful choral recording of the song “Linden Lea” at You Tube. <http://www.youtube.com/watch?v=nvoYHwYDYLA>

The Oak and the Ash

A north country maid up to London had strayed,

Although with her nature it did not agree.

So she wept and she sighed, and bitterly she cried,

“Oh! I wish once again in the north I could be!

Oh! the oak and the ash and the bonnie ivy tree,

“While sadly I roam I regret my dear home

“Where the lads and young lasses are making the hay,

“Where the birds sweetly sing and the merry bells do ring,

“And the maidens and meadows are pleasant and gay.

“No doubt, did I please, I could marry with ease;

“Where maidens are fair, many lovers will come.

“But he whom I wed must be north-country bred

“And must carry me back to my north-country home.

“They all grow so green in my own country.”

In this wistful English ballad, a country-maid who has gone to London longs to return to the northern home where flourishes “the oak and the ash and the bonnie ivy tree.” The above is one of several versions known as the “North Country Maid.” One of the earliest of these would have her hail from the Dalby Forest in the northern Yorkshire moors (today a popular location for cyclists). The oak and the ash still flourish there, as do cherry, birch, larch, and Scots pine.

I always find interesting when researching folksong the many variations in the lyrics (a consequence of the dynamic oral tradition). The full version of the song extend the maiden’s reminiscences of her home and her resolve to mary only a lad that is North Countrie bred.” <http://www.contemplator.com/england/oakash.html>

The chorus that gives the song its name is attributed to Martin Parker, a prolific writer of ballads whose work was often borrowed. Others (and especially the Scots) appropriated these two lines in numerous poems and songs. While the oak and the ash seem to be permanent fixtures, the third “bonnie” tree might be an ivy, elum (elm), rowan, willow, or birken (birch).

The north-country versions of the sung are sung to the tune “Quodling’s Delight,” which has been traced as far back as 1608, and is perhaps older.

Light Shining Out of Darkness

God moves in a mysterious way,

His wonders to perform;

He plants his footsteps in the sea,

And rides upon the storm.

He treasures up his bright designs,

And works his sovereign will.

The clouds ye so much dread

Are big with mercy, and shall break

In blessings on your head.

Judge not the Lord by feeble sense,

But trust him for his grace;

Behind a frowning providence,

He hides a smiling face.

His purposes will ripen fast,

The bud may have a bitter taste,

But sweet will be the flow’r,

Blind unbelief is sure to err,

And scan his work in vain;

God is his own interpreter,

And he will make it plain.

The Lord’s my shepherd, I’ll not want:

He makes me down to lie

In pastures green; he leadeth me

The quiet waters by.

My soul he doth restore again,

And me to walk doth make

Within the paths of righteousness,

E’en for his own name’s sake.

Yea, though I walk in death’s dark vale,

Yet will I fear no ills,

For though art with me, and thy rod

And staff me comfort still.

My table thou hast furnished

In presence of my foes.

My head thou dost with oil anoint,

And my cup overflows.

Goodness and mercy all my life

And in thy house forevermore

My dwelling place shall be.

Down by the Salley Gardens

Down by the salley gardens, my love and I did meet.

She passed the salley gardens with little, snow-white feet.

She bid me take life easy, as the leaves grow on the tree;

But I, being young and foolish, with her did not agree.

In a field by a river, my love and I did stand,

And on my leaning shoulder she laid her snow-white hand.

She bid me take life easy, as the grass grows on the weirs;

But I was young and foolish and now am full of tears.

A Little Poetry—Yeats presented “Down by the Salley Gardens” (originally titled “An Old Song Resung”) as “an attempt to reconstruct an old song from three lines imperfectly remembered by an old peasant woman.”

The word ‘salley’ suggests a garden of weeping willow trees. A ‘weir’ is a dam built across a river to control water levels.

A Little Music—In 1909, Hubert Hughs set Yeat’s poem to the wistful air “The Maids of the Mourne Shore.” You can listen to Roisin Reilly sing it on YouTube. <http://www.youtube.com/watch?feature=player_embedded&v=g5e8OJibhmI>

Believe Me, If All Those Endearing Young Charms

Believe me, if all those endearing young charms,

Which I gaze on so fondly today,

Were to change by tomorrow and fleet in my arms,

Thou wouldst still be adored, as this moment thou art,

Let thy loveliness fade as it will;

And around the dear ruin each wish of my heart

Would entwine itself verdantly still.

It is not while beauty and youth are thine own,

And thy cheeks unprofaned by a tear,

That the fervor and faith of a soul can be known,

To which time will but make thee more dear.

No, the heart that has truly loved never forgets,

But as truly loves on to the close:

As the sunflower turns on her god when he sets

The same look which she turned when he rose.

“Believe Me, If All Those Endearing Young Charms” was a popular song in early nineteenth-century Ireland and America, written by Thomas Moore to a traditional Irish air in 1808. According to story, Moore wrote the song for his wife Bessy after she was disfigured by smallpox. Believing that he could no longer love her, Bessy kept herself locked in her room and would not let her husband see her. Moore wrote the lyrics of this song to assure his wife of the constancy of his love. Hearing him singing the song outside the bedroom door, Bessy finally let her husband in and fell into his arms, her confidence restored.

You can listen to Joni James sing the song at YouTube. <http://www.youtube.com/watch?v=87WWMvlPXA8>

As fair art thou, my bonnie lass,

Soo deep in luve am I,

And I will luve thee still, my Dear,

Till a’ the seas gang dry.

Till a’ the seas gang dry, my Dear,

And the rocks melt wi’ the sun!

O I will luve thee still, my Dear,

While the sands o’ life shall run.

And fare thee weel, my only Luve,

And fare thee weel a while!

And I will come again, my Luve,

Tho’ it were ten thousand mile!